For Private Martin Lamb, holding his new-born baby girl in his arms was the best moment of his life. Having been on tour in Iraq he arrived home just before his wife, Melissa, gave birth, but had to leave again when she was just two weeks old.

Martin spent much of his time on tour, but when he found out he and his wife were expecting he was over the moon. Rosie Lamb was born on 1st February 2009 and Martin had the honour of naming her.

Martin and Rosie’s time together was, however, cut sadly short. When she was just two years old, Martin was killed following an IED explosion in Afghanistan. He was 27 years old.

Two years after her daddy’s death, Rosie joined Scotty’s Little Soldiers, the charity for bereaved Forces children and young people. The charity has been a pillar of support for Rosie throughout her childhood and, this month, Scotty’s pays tribute to her father and hero.

Although Martin spent many of his final years in Iraq and Afghanistan, Melissa said that when he was home, he was an incredibly hands on dad. She said: “He was just brilliant with Rosie, he loved being around her and she’s grown up to be so much like him.”

While Martin was on tour, Melissa would write and send him photos of Rosie so he could see how much she was changing. “I didn’t want him to miss out on how much Rosie was growing and changing, pretty much every week. He’d always buy her a present every time he went away.”

As she’s grown up, Rosie has inherited many of Martin’s personality traits, as well as some of his features. Melissa said: “Martin was the funniest and most awkward person I have ever met. He had the loveliest brown hair that Rosie has inherited and reminds me of him every day. They are also so similar in personality.”

Martin was completely committed to the Army and, after joining in 2003, quickly excelled as a Rifleman. In 2005, Martin was deployed to Afghanistan for the first time and on his return passed the All-Arms Commando course, which Melissa said was one of his proudest moments.

It was on 5th June 2011, while on patrol in Afghanistan, that Private Martin Lamb was killed. Lieutenant Colonel James de Labilliére paid the following tribute at the time of his death: “Lamby will be remembered for his energy, zeal and commitment – he was a man with many friends and others naturally gravitated to him. He was one of life’s real characters, and he was due to be promoted soon. He was one of my very best; talented, capable and naturally gifted as a most professional soldier.”

The day Melissa was told her husband wouldn’t be returning from Afghanistan was one of the hardest days of her life. She said: “I was in complete shock, one minute you’re a partnership, making decisions together, and then it was left up to me to make the decisions without him. I had no idea what to do. I was 25, widowed and with a two-year-old. There’s no rule book that tells you what to do.”

Melissa decided straight away that she wouldn’t keep anything from Rosie. She wanted her to know from a young age what had happened to her dad, and what a hero he was. She said: “I wanted everything to be very open and for her to ask any questions she had.

I make sure we talk about Martin as he’s still a huge part of our lives. As Rosie’s grown up, particularly after starting school, she’s started to ask deeper questions, more about why he died. Last year was also difficult for her with Afghanistan being in the news every day, it brought it all back for her.”

As Rosie was so young when her dad died, she has very few memories of him, but something she does know is that her dad died serving his country. She said: “I’m so proud of my dad, for helping those people in Afghanistan. I’ve just turned 13 and really miss him. It’s also his birthday soon which is why I wanted to nominate him for Hero of the Month.”

For the last nine years Rosie has been supported by Scotty’s Little Soldiers, a charity which offers integral support to children and young people who have experienced the death of a parent who served in the British Armed Forces.

The charity has been a big part of her life over the last few years and helped support her through her grief. Rosie said: “Scotty’s means so much, I know that I’m not the only one who misses their parent.”

Over the years, Rosie has benefited from Scotty’s support programmes including respite breaks with her mum, grants for horse riding lessons and the opportunity to meet others in the same situation at the annual Scotty’s Christmas party.

Melissa said: “When Martin died, we felt so detached from the Army community, but Scotty’s gives you that connection back. For Rosie, it’s been amazing, she has loved making new friends and she now knows that she’s also not alone or ever forgotten.”

Rosie at a Scotty's Christmas Party 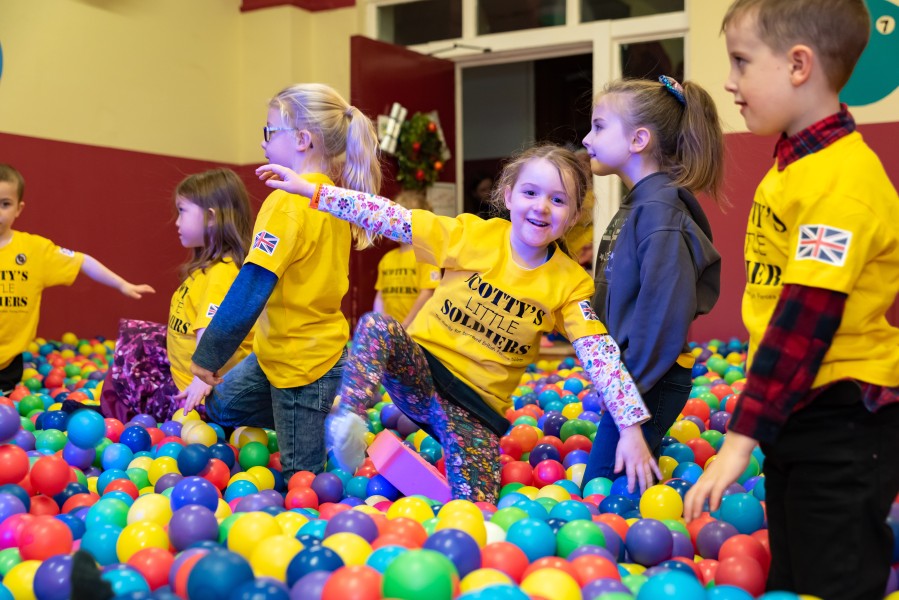