When a loved one dies it’s entirely normal to experience a large mixture of emotions. Sometimes our feelings can be a bit overwhelming and cause us to act in ways that are out of character, which is why being able to manage our emotions in a safe, healthy way is so important.

At Scotty’s Little Soldiers, our mission is to support bereaved military children and young people, giving guidance, providing one-to-one support and offering ways to help them deal with their grief. This article covers some frequently asked questions on managing emotions and is aimed at adults supporting bereaved children.

Is there a normal way to grieve?

There is no right or wrong way to grieve. Grief is very individual and can look like many things. How a child acts following a bereavement can also depend heavily on their age, culture, how they were raised and the circumstances of their loved one’s death. There are many different factors that affect how someone grieves and we should always try to be aware of this.

How different people may cope with grief

There are two broad styles of grieving people can fit into: feelings-focussed and action-focussed. People who are feelings-focussed tend to act emotionally and openly, showing their grief and allowing others to share in it. Action-focussed people, on the other hand, tend to be more reserved and closed off, choosing instead to channel their grief into an activity they consider productive. This could be something like looking after the garden, doing the shopping or cleaning the house.

A feeling-focussed child or young person may be openly emotional and want to speak with family and friends and their bereavement, while an action-focussed child or young person might delve into a particular hobby or be unusually active. Regardless of which they are, we always recommend reassuring children and young people that their reactions are normal.

What is the difference between emotions and feelings?

Emotions are the unconscious reactions we have to things, while feelings are what we experience because of those emotions and can vary from person to person. For example, two people may experience the emotion of uncertainty around a group of strangers; person A takes this emotion and labels it as feeling awkward, as they don’t know anyone there, while person B takes the same emotion of uncertainty, but their mind labels the feeling as excitement and an opportunity to meet new people.

How can bereavement affect emotions and feelings?

When applied to bereavement, this means it’s possible to experience similar emotions as someone, but still feel very different. For this reason, it’s important not to judge someone for acting in a way you don’t understand.

It’s not unusual for young people, especially children, to show changes in behaviour after a close bereavement. There are many potential reasons for this, but one is that the emotion of grief turns into feelings of hurt, anger or loneliness, causing them to act in ways that seem out of character. Sometimes, their behaviour may be negative, so in order to help them get better it’s important we understand why they are acting the way they are.

What is puddle jumping?

‘Puddle jumping’ is a term that describes a child jumping from one emotion to another with little to no warning. This is very common after a bereavement, when a child can experience grief in seemingly random fits and bursts. This often happens because many children find it hard to cope with sad feelings for too long, so they may feel the need to ‘jump’ out of their grief and do something that distracts them before returning to it.

Some adults mistakenly think this means children aren’t affected by death, as their sadness can quickly disappear. They may also try to stop them from feeling sad or, conversely, try and pull them away from their sadness before they’re ready. We suggest doing neither and instead allowing the child to grieve at their own pace.

Puddle jumping is perfectly normal, and means a child is learning how to deal with their grief. Nonetheless, we understand it can be very draining for the adults looking after a child during this stage, as they frequently have to change their approach based on quickly changing behaviour.

How can I help a child manage their emotions?

In order to manage emotions, it’s helpful to first understand why someone feels them. If a child is angry, for example, sit down with them and try to work out why. Once you both know the cause, it should be much easier to control. There are also some simple exercises you can do with children to release their emotions in a safe, stable way:

If they’re angry, we suggest giving them some pencils and paper and letting them scribble as hard as they like, getting their feelings out on the page before screwing it up and ripping it apart.

If they’re worried, they could write their worry on a piece of paper, then around it put all the reasons they don’t need to be worried and other good things. They can then keep it in their pocket and look at it whenever they start to feel uncertain.

For any negative emotion, they could create a music playlist that reflects the way feel. Listening to music that relates to us is a great way to feel understood and release all those pent-up feelings. There are also lots of great books for children and young people that aim to help them process their emotions.

Once you have experienced a bereavement, the feeling of the loss will never go away. However, as we grow and gain more experiences, filling our lives with things outside of our bereavement, the effect it has on us every day will become less and less. Sometimes this can take a while – especially if the person who died was close to us – but over time we can grow around our grief.

Imagine a black ball in a glass jar; they’re almost the same size, and the jar can barely contain it. That’s us immediately after a bereavement. But, little by little, more shapes begin to appear in lots of different colours, and the jar gets bigger to hold them all. It’s not very noticeable at first, but it keeps growing for weeks, months, years, until suddenly the jar is three times the size it used to be, and that black ball is just one of many, multi-coloured shapes inside the jar. At first, it might look like the ball has gotten smaller, but in realty the jar has just grown bigger.

That’s us after a loved one has died. At first, the black ball of grief feels overwhelming, but over time we grow around it and start to fill up with other, brighter emotions.

Seeking support after a bereavement 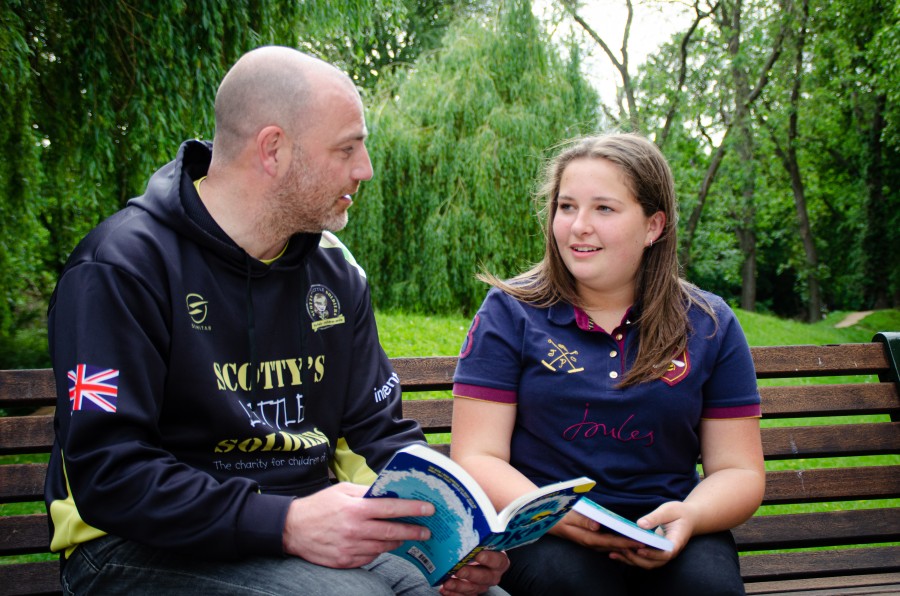